How it all began, sort of…

It still seems more than a bit odd, or incongruous, perhaps, to see my name and author in the same title block.  Writing, authoring, if you like, was never in my career plans — to the extent there ever were such plans — although my wife says she told everyone fifty years ago I would someday write a book (I’m reminded of a cartoon): 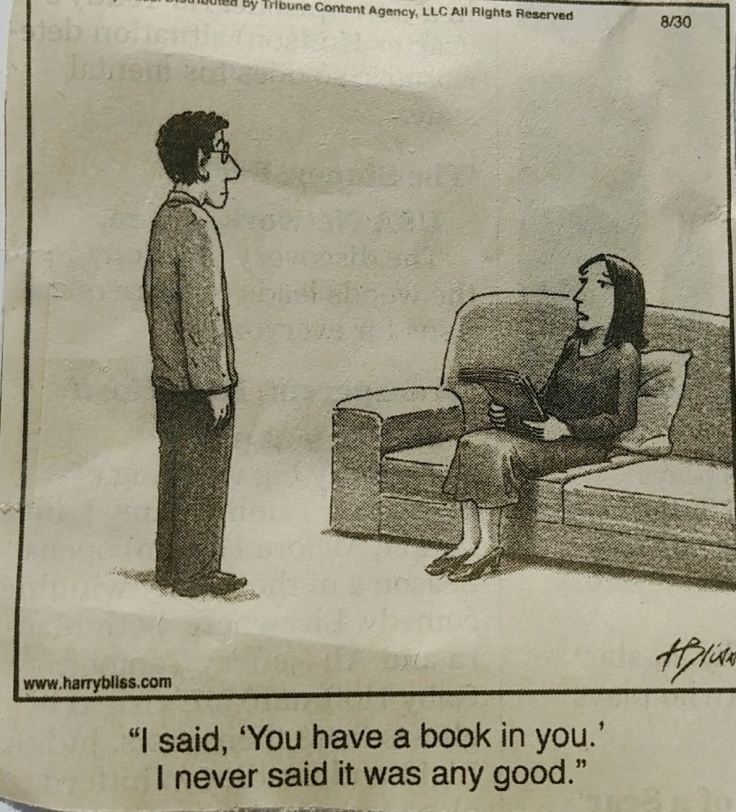 So, when I found myself with some unexpected time on my hands in 2011 — having spent almost three years helping my wife recover from a debilitating episode of transverse myelitis (not recommended;  fortunately she’s recovered nearly fully, but still can’t drive) — I cast about for a new pastime.  I’ve always been an amateur historian, serious about the stuff to read widely, insufficiently serious to become an academic type.  And in my newfound semi-leisure, I began reading and re-reading my way through our library.

Alongside Tuchman and Keegan, I read Clancy and Fitzgerald, Grisham and Faulkner and seemingly everyone in between.  At some point I had one of those ‘I can do this’ epiphanies, the same that have led many astray.  I latched onto a notion – historical fiction, World War One era – and consumed with a desire to create my own fictional world, populated with characters of my creation, I was off.

I had no idea.

Well, I did have an idea, namely how the war could have been ended earlier and in less costly sums of blood and treasure and without the twin curses of Versailles’ bitterness and Bolshevik depravity.  And I decided to keep as close to the real record and timeline as I could — not an alternative history flight of fancy a la Harry Turtledove, but what the historian Niall Ferguson terms a counterfactual — a what if based on plausible departures from actual events.  My premise was simple:  in January of 1918, the war in the West had subsided for the winter with Germany still in a commanding position, the war in the East had ended with Russia’s capitulation to Germany and her commanders facing a decision:  how to crush the British and French before the Americans arrived in force with the most precious of resources:  manpower.

That premise boiled down to a simple, yet plausible departure from the real outcome, namely a German declaration of victory and withdrawal to impregnable defensive lines, daring Lloyd George and Clemenceau to justify more senseless bloodshed to their war-weary populaces.

Of course, it wasn’t that simple.  Never is.  That was my challenge, to create characters and actions to carry that premise through, realistically, to that end.

James Emerson Loyd is a recovering architect and retired real estate executive, hardly apprenticeships to becoming an author of historical fiction. But, after reading and re-reading his twentieth century histories and some Clancy and Crichton and Alan Furst, he decided one day to write his first novel. As an amateur historian of the first half of that century, he had long been fascinated by the First World War and how Germany’s collapse in 1918 led to Europe’s descent into totalitarianism. So, with a rough idea of a subject – how that collapse could have been prevented – he sat down at the keyboard and began writing. Before long he found himself simply taking dictation from his characters as they grew into the storyline, and three volumes and thirteen hundred pages later, he was done with his saga, The Great War Won. For someone who had never written any fiction, serious or otherwise (his college entrance essays aside), he must have done something right: The Historical Novel Society named his trilogy an Editors' Choice and more, one of the best Indie novels of 2016. He recognized the small niche market for WWI historical fiction and went the Indie publishing route early on (CreateSpace and Kindle), creating his own imprint, Dreadnought Press. Despite earning a Harvard MBA with Distinction, he still has much to learn about book marketing, freely admitted. A San Antonio native, he spent twenty-five years away from home then returned after marrying his high school sweetheart. They live with their three dogs (one French pointer, one Maltese rescue and one German schnauzer) in their old neighborhood.

This is a text widget, which allows you to add text or HTML to your sidebar. You can use them to display text, links, images, HTML, or a combination of these. Edit them in the Widget section of the Customizer.